Your cart is empty

See “Speak Up” the television Show for New Zealand Freemasons

The ANZMRC, or Australian and New Zealand Masonic Research Council is the organisation which links most of the research lodges and chapters throughout the far East, Australia and New Zealand. Bro Kerry Nicholls, as President, and Bro Colin Heyward, both in New Zealand, have combined with their colleagues in Australia, Bros Brendan Kyne, Neil Morse and Kent Henderson to organise the biennial tour of the group by a visiting lecturer. In the intervening year a conference is held – last year in Melbourne (2018) and next year in Dunedin (2020). The tour has welcomed a number of top-level Masonic speakers and writers over the years, primarily from the United Kingdom and Europe. This year the guest visiting lecturer will be Bro Dr Mike Kearsley.

The twelve papers offered for this tour are listed below. These are the papers that will be printed in the Tour Book “On the Square”. 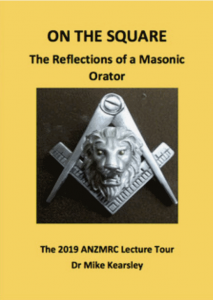 My most popular presentations at this point are: 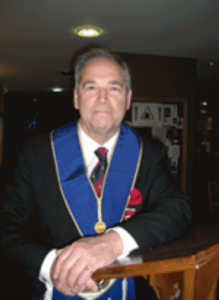 WBro Dr Mike Kearsley is Provincial Grand Orator for Middlesex and has been involved in the oration scheme for seven years. He was initiated into freemasonry in the Hawera Lodge № 34 in Hawera, Taranaki, New Zealand and was passed and raised in Mairehau Lodge № 391 in Christchurch, New Zealand. In the 1980’s he put all the members of the Grand Lodge of New Zealand (44,000) onto computer for the first time thus opening the door to better communication. He was a member of the Avon Lodge Orchestra. Later he joined the David Bonner Lodge № 9678, the Musicians Lodge of the province of Middlesex, under the English constitution becoming its Master in 2010 and Secretary. He is a member of the Temple of Athene Research Lodge № 9541, becoming Master in 2013, the Feltham Lodge № 7307, becoming Master in 2012, Quatuor Coronati Lodge № 2076 where he was secretary of the lodge and of the correspondence circle and London Stone RA Chapter № 2541, becoming MEZ in 2012. For a year he worked in Freemasons Hall in the QCCC office to ensure the running of this and to transfer all membership to external organisers and close the office. For the last three years he has been editor of The Square Magazine – the independent magazine for Freemasons which is circulated around the world. In this capacity he has visited many conferences as a guest speaker and reported on many Masonic events. He is the organising chairman of the European Masonic meeting planned for June 2nd 2017 in Twickenham and London when Freemasons and their wives from all over Europe meet to socialise and enjoy their Masonic connections. He is also supporting the organisation of the Province of Middlesex 300th anniversary celebration for June 24th 2017 as organised by Temple of Athene Lodge.

He has always had an interest in Masonic research and was a member of the correspondence circle of Masters and Past Masters Research Lodge, Christchurch, New Zealand. He has, therefore, produced many papers and presentations for Masonic audiences. The province of Middlesex is part of the national oration scheme and continues to provide over 100 presentations to lodges each year. In 2011 he was awarded the Norman Spencer prize, by Quatuor Coronati Lodge, for a paper on the formation of the Grand Lodge of New Zealand, after which he was offered full membership. In 2014 he was appointed as the Prestonian Lecturer and his paper was 1814 Conflict and Change – the first year of the United Grand Lodge of England. In this capacity he has now presented over 60 lectures in such as the UK, Ireland, Bermuda, South Africa, Gibraltar, Greece, Portugal, Israel and the United States. He has been able to donate considerable sums to his chosen charity – DEBRA.

During his career, he was in sales and management in IBM, the marketing director for Alexander Stenhouse and Marsh McLennan, insurance brokers, the marketing director for Computations Plc, now part of Misys and principal consultant in Coopers and Lybrand (PWC).  He has operated as an independent consultant for many years and continues to lecture in marketing, consultancy and general business areas at several Universities. He holds a number of degrees in business and education and is a fellow of many professional bodies for the same.  He is the author of a number of publications and papers in these areas.  He has travelled extensively for business purposes and as a guest lecturer and speaker at conferences.

The Kuala Lumpur, Singapore, Hongkong and Australia legs of the tour are now complete. See reports of some sessions already held.

Once further detail becomes available this list will be updated.

Presentations are, of course, shorter than the book chapters and every presentation is full PowerPoint and colourful.

Thursday 10 October 2019:– Wellington – Four Years on The Square – the Musings of a Masonic Editor.

Saturday 12 October 2019:– Foxton – 1814, Consolidation and Change – the first year of the United Grand Lodge of England.

Wednesday 23 October 2019:– New Plymouth –Four Years on The Square – the Musings of a Masonic Editor.

Tuesday 5 November 2019:– Gisborne – The Formation of the Grand Lodge of New Zealand. – This will be a unique experience where four Lodges have bonded together to bring this presentation to you.  A big thank you to Abercorn-Tuahine Lodge No 76, Lodge Gisborne No 233, Montrose Lodge No 722 and Turanganui Lodge No 1480.

This will complete the North Island Lecture Tour Presentations, however due to the approaching holiday season we will commence the South Island tour presentations in late January 2020 to Mid -February 2020.

The following two dates have been confirmed for South Island presentation’s.

Thursday 13 February 2020:– Invercargill. The Roberto Calvi affair, a Masonic Scandal? On 11th February the Southland Research Lodge will hold its Installation. Make this a double banger event not to be missed.

We are currently working to establish suitable dates for other locations and once these become available they will be posted and circulated.
For further details please contact : cheker@xtra.co.nz or lordbiff@hotmail.com