Your cart is empty

We propose to give you updated Episodes as and when we receive them. 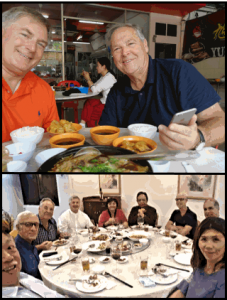 The 2019 ANZMRC Speaker Tour has begun and Bro Mike has arrived safely in Kuala Lumpur from London at 5 pm on the 24th July and is in the very capable hands of Bro Anton Alers.

Prior to any presentation Bro Anton Alers (on Mike’s left) took Bro Mike to a diner in order to test and prove him a Worthy Malaysian with the trial of Bak Kut Teh and the consumption of Durian.

Once this formality was completed then the evening dinner at the Royal Lake Club with brethren and ladies of SEAVIC, Baldwyn Lowick Lodge (E. C.), Lodge Harmony (I. C.) and Tullibardine (S. C). 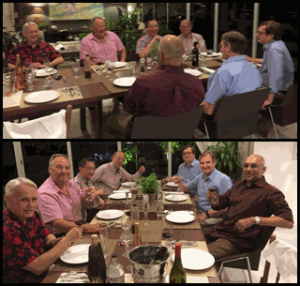 Bro Mike arrived safely in Singapore on Sunday 28th July and there was a small dinner attended by some of the Lodge officers of The Lodge St Michael in the apartment of Bro Michael Gray (on left of Bro Mike). A happy time was had by all with plenty of discussion. But it is down to work today with a lunch time presentation and another one at a meeting of Lodge St Michael this evening. 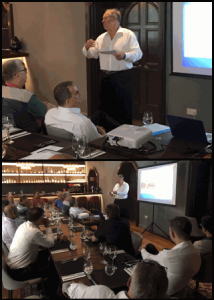 Two photos of Bro. Mike giving his lunchtime presentation to a group of Freemasons at the Masons Table Restaurant, Freemasons’ Hall. Singapore on Monday 29 July 2019.

The presentation was “The North East Corner – Foundation and cornerstones , the Masonic Myth”.

This was followed by an interesting discussion which extended beyond the lunch. 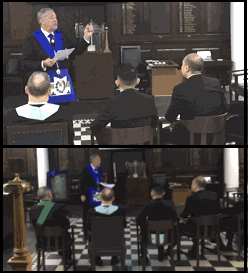 Mike gave a presentation to the regular meeting of The Lodge St Michael 2933 EC at Freemasons’ Hall. Singapore on Monday 29 July 2019 on “1814 Consolidation and Change – The First Year of the United Grand Lodge of England”.

The attendance was very good with a number of visitors including those from the Scottish, Irish and French Constitutions.

The presentation was received extremely well by all that attended with many favourable comments resulting in a wish that Mike could return at a later date. The lecture will go down in the records as being one of best, if not the best, lectures that have been presented at the Lodge in recent memory.

The Lodge St Michael No 2933 EC is the second oldest Research Lodge in the English Constitution having been founded in 1902 on the initiative of Sir Charles Warren, the first WM of Lodge Quatuor Coronati, after he was posted to Singapore and became the District Grand Master of the Eastern Archipelago. 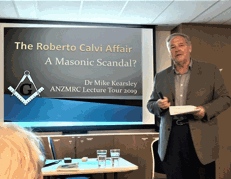 Bro Mike arrived safely in Perth and presented his paper on ‘The Roberto Calvi Affair – a Masonic scandal’  to a mixed audience of 24 on the 5 August.

His tour books were a sell-out with some further orders received.

The feedback is that they would like an encore and would love to have Bro Mike return for future presentations and visiting to a number of West Australian Lodges.

A very enjoyable and informal BBQ was arranged that led to some discussion and get together of a number of people.

The Launceston leg of the 2019 ANZMRC tour has been a success, with 41 in attendance and all the tour books sold out.  The feedback was as follows: m- what a wonderfully entertaining speaker is Wor Bro Dr Mike Kearsley, thank you.

The ANZMRC produced book of Bro Mike’s talks is a special treasure! 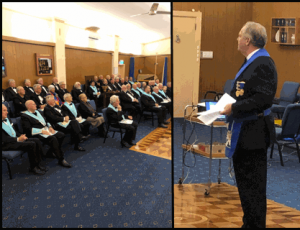 The Hobart leg of the tour has been completed and Mike did not disappoint. Around 50 Brethren and guests attended his presentation of his 2014 Prestonian Lecture on the formation of the Union of Lodges to form the UGLE.

Attendees were enthralled and entertained by Mike for over an hour, at a time when most would be heading for the bedroom, and following his presentation a banquet was held in the dining room.

The Worshipful Master of Hobart Lodge of Research, Jack Clear, and his wife took him to lunch at the Royal Yacht Club of Tasmania on Tuesday which he thoroughly enjoyed and again held our attention for another 2 hours over lunch.

The Worshipful Master of Hobart Lodge of Research, Jack Clear, thanked ANZMRC for your selection of such an outstanding presenter.

The photos show those attending his presentation with Mike in full flight.

A raffle was held as a fundraiser for his chosen charity DEBRA and a donation of $240 was made by Hobart Lodge of Research.

Again all the tour books were sold out and orders have been taken. 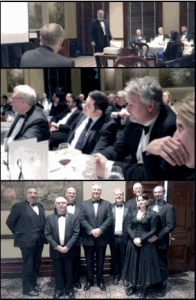 Friday 16 August the Victorian Lodge of Research hosted W Bro Dr Mike Kearsley at the Australia Club for the speaking event in Melbourne.

This was well attended with over 50 people present.

It was an outstanding presentation by Bro Mike on the “Roberto Calvi Affair & the P2 Lodge – a Masonic Scandal?” and once again all tour books were sold out. 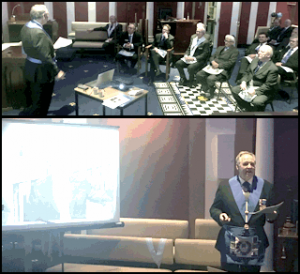 The presentation was the “Roberto Calvi Affair & the P2 Lodge – a Masonic Scandal?”

The presentation was well received and entertaining for all. 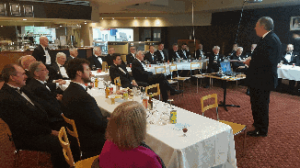 Monday 26th August Bro Mike informed and entertained masons and friends from the ACT and Queanbeyan with his presentation on the “Roberto Calvi Affair & the P2 Lodge – a Masonic Scandal?” after witnessing a second degree performed by Lodge Canberra Unity.

All books were sold and orders for more were taken.

Several people remained for some time after the close of the meeting chatting with Bro Mike until 11:30.

On the 29 August Barron Barnett Lodge (Brisbane) hosted a special meeting wherein Bro Mike Kearsley presented his ANZMRC 2019 tour lecture, on this occasion the subject being “The Roberto Calvi Affair”.

His presentation was excellent and well received by all present including the Grand Master and two PGMs.

This was an informal (open) meeting on a Thursday evening at Stones Corner Masonic Centre.

Attendance was about 40 members (including one lady).

The atmosphere was very enthusiastic and enjoyable.

W. Bro Mike gave his interactive presentation – ‘Reflections on the meaning of the Royal Arch Ritual’ to a group of seven enthusiastic brothers at Tully, Cairns, on Sunday 1st September.

Even though it was Fathers’ day it was an invigorating and very good session.

At Yungaburra the following evening 2nd September we had a group of 15 plus two ladies to hear W. Bro Mikes presentation ‘Reflections on King Solomon’s Temple, fact or fiction?’

We had an interesting forum of questions and discussion after.

Overall it was a worthwhile and interesting time. 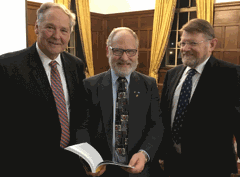 Bro. Mike’s presentation Research Lodge of Wellington was the resumption of the New Zealand leg of the 2019 ANZMRC tour. Bro. Mike covered his experiences as Editor of “The Square”, an independent Masonic magazine in England.

He covered a wide range of material, giving a summary of issues relating to historic research, masonic personalities, and current issues from the magazine and of concern to wider Freemasonry.

Bro. Mike had given careful attention to the presentation – attracting and keeping our attention with a careful mix of pictures, humour, facts and issues to keep us thinking.

A great after dinner talk which pleased ladies and masons alike.

Kerry Nicholls, the ANZMRC president, met up with Bro Mike in Wellington and they went to the Featherston Bar for a light lunch and a Guinness.

They then proceeded, after lunch, to the Wellesley Boutique Hotel and heard the presentation of two interesting papers of Masonic interest, then drove north for a couple of hours to Foxton where Bro Mike presented ‘1814 – Consolidation and Change – the first year of the United Grand Lodge of England’. This was well attended by a mixed audience of 32.

There were many questions not only in relation to the presentation but also on other areas of Masonic interest. The presentation was met with very positive comments after it had concluded and Bro Mike then mingled with many attendees, whilst a fine supper was enjoyed, seeking to soak up his vast expanse of knowledge. 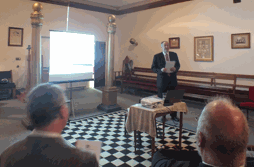 Bro Mike arrived safely in Eketahuna on Tuesday 15 October 2019 and presented his paper on ‘The Roberto Calvi Affair – a Masonic Scandal’ to a mixed audience of 28.

Even though a bitter southerly was the weather outside the Lodge Room was very warm and inviting, with a great supper of finger food including cakes, savouries and other tempting morsels.

W Bro Peter Knight and his team provided an excellent venue and are to be congratulated on their hard work.

Attendees came from at least 3 Masonic Districts as well as some members of the public.

A very happy time was had by all with plenty of discussion.

We now look forward to the next presentation at Research Lodge of Taranaki in New Plymouth od Wedensday 23 October.

Awaiting an update for publication.

Bro Mike gave a presentation to the regular meeting of The Hawkes Bay Lodge of Research – No 305 in the Refectory after the Lodge had completd its very short business meeting.

The presentation was before a mixed audience of 30.

It was ‘The North- East Corner: Foundation and Cornerstones, the Masonic Myth’.

The presentation was received extremely well by all that attended with many positicve comments and interesting questions from the floor.

This presentation has to be seen as one of best presented at this Research Lodge for some time and there is no doubt it will lead to what will be many follow ups of other presentations being given.

A light supper was served at the conclusion with informal discussions with Bro Mike. The book sales exceeded expectations.

All in all a very productive and enjoyable evening of Masonic Research.

We await further updates following the presentation engagements Bro. Mike will be carrying out.